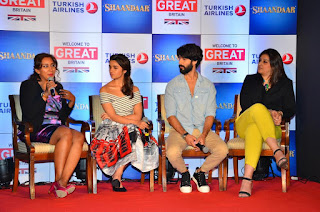 Mumbai, October 12, 2015: VisitBritain launched their latest Bollywood Britain – Shaandaar campaign today, carrying forward their Bollywood association in India. This campaign is in association with the Indian Film Industry’s prominent film labels, Fox Star Studios, Phantom Films and Dharma Productions. Shahid Kapoor and Alia Bhatt, who star in the much awaited rom-com Shaandaar, which will be releasing on 22nd October 2015, were seen at the launch event today promoting the film’s alliance with destination Britain and the locations where the film has been shot extensively.
Bollywood fans have been experiencing Britain through films over the years, often these films are around romance and families. The beauty and romance of the destination, well captured in these films, provide the perfect setting for film lovers to visit and experience this in Britain for themselves. Memories, Passion & Adventure are the latest offerings of the Bollywood themed campaign that VisitBritain has undertaken in India this year. Britain welcomed over 390,000 visitors from India in 2014, making India the biggest source market for visitor numbers from the BRIC markets. Therefore, the need to create bespoke campaigns that appeal to the Indian visitors is a priority for VisitBritain. The synergies with the film Shaandaar are well matched, as the film has been extensively shot in the English Countryside.
Bollywood Britain – Shaandaar, a contest based campaign, launches the TVC with a strong digital focus in association with sponsor partner Turkish Airlines. The airline is offering 2 Couple Business Class flights to Britain for the lucky winners to go explore the stunning British countryside. Aimed at the young discerning Indian traveller, to assist them in planning their Bollywood Britain travel better, VisitBritain along with Lonely Planet India, have also published the guide ‘Great Britain – The Bollywood Way’. This guide draws special focus on all the serene landscapes of Britain where iconic Bollywood films have been shot.
VisitBritain’s Regional Manager for Asia Pacific & Middle East, Sumathi Ramanathan adds, “We are very pleased to be working with this movie and the fantastic star cast in it. We are honoured to have partnered with Dharma productions for this campaign. Britain is known for its lush countryside and picturesque locations and this opportunity helps us celebrate that and much more. We hope that this film is a blockbuster and encourages all the Indian travellers to come relive their Bollywood memories in Britain.”
Turkish Airlines General Manager’s, Mr. Mehmet Akay from Mumbai and Mr. Ozer Guler from New Delhi, said, “We are delighted to be the airline partner of choice, for the VisitBritain – Shaandaar campaign. Britain is one of the most picturesque places in the world; an ideal romantic get-away with its scenic beauty, food and nightlife. Turkish Airlines flies daily to Britain from across 109 countries via Istanbul, with quick 3 hour connectivity. The Airline has one of the best services to offer to its business class travelers.  Turkish Airlines is the only Airline flying to maximum countries in the World. Because of our superlative services we have been also chosen by Skytrax as “the Best Airline in Europe” for 5 years in a row. We would love the campaign winners to “Widen” their experience and make their travel unforgettable with Turkish Airlines”.
The lead actors of Shaandaar, Shahid Kapoor and Alia Bhatt, spoke about their experience filming Shaandaar and their time in Britain. Alia Bhatt said "I love England, and it's one of my favourite holiday destinations. The shopping in London is fantastic. And there's so much to discover when you step out of the cities - from the very pretty Lake District to Leeds where we shot a lot of Shaandaar. My mom is British-born and it is where she began acting so it will always have a special place in my heart as well as in my family.”
Shahid Kapoor added, 'I enjoy the UK very much. There's a wealth of history, dramatic scenery, sacred sites, legend and tradition all come together, and there's so much to discover when you step out of the cities. The countryside specially, invokes a sense of romance that's perfect for a holiday."
The star-studded event took place at the Taj Land’s End, Mumbai and was attended by the British Deputy High Commissioner, senior VisitBritain management, as well as Turkish Airlines delegates.
----
About VisitBritain
VisitBritain is the national tourism agency of the UK, a non-departmental public body, funded by the Department for Culture, Media and Sport, responsible for promoting Britain worldwide and developing its visitor economy.
Our mission is to grow the value of inbound tourism to Britain, working with a wide range of partners in both the UK and overseas. Through our global reach, we aim to increase visitor spend to all parts of Britain and improve Britain’s ranking in the eyes of international visitors.
About Turkish Airlines
Established in 1933 with a fleet of five aircraft, Star Alliance member Turkish Airlines is a 4-star airline today with a fleet of 298 (passenger and cargo) aircraft flying to 280 destinations worldwide with 230 international and 50 domestic. According to Skytrax survey of 2015, Turkish Airlines was chosen "Europe's Best Airline" for the fifth and "Best Airline in Southern Europe" for the seventh consecutive time. Having won in 2010 the world's "Best Economy Catering Service", in 2013 the world’s "Best Business Catering Service", and in 2014 "Best Business Catering Service" awards, Turkish Airlines was this year awarded the world's “Best Business Class Lounge Dining” and "Best Business Airline Lounge"  prizes in the Skytrax survey. More information about Turkish Airlines can be found on www.turkishairlines.com.

Posted by orientpublication at Tuesday, October 13, 2015
Email ThisBlogThis!Share to TwitterShare to FacebookShare to Pinterest