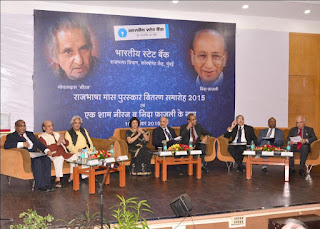 Mumbai, September 18, 2015: State Bank of India, Corporate Centre celebrated its RAJBHASHA PRIZE DISTRIBUTION AND FFELICITATION FUNCTION on 16th September 2015. In a grand manner the programme was organized in the Bank’s auditorium under chairmanship of Mrs. Arundhati Bhattacharya, the CHAIRMAN of SBI.  All MD & Group Executives of the Bank Mr. P. Pradeep Kumar, Mr. B. Sriram, Mr. V.G. Kannan and Mr. Rajnish Kumar were also present and shared the dais. Addressing the gathering Mrs. Bhattacharya said that from the very beginning of its establishment in 1806, State Bank of India had to use Hindi and Bangla on its Coins and Currencies. Out of our 14 Circles, there are 10 Circles who do not belong to Hindi region, despite the staff working in those Circles feel proud to speak, write and work in Hindi.
On the occasion Mrs. Bhattacharya felicitated the renowned poets Dr. GOPALDAS NEERAJ and NIDA FAZLI for their prestigious contribution in literature. Dr. Neeraj and Mr. Fazli recited their poems in SOOFIYANA style.
Four Circles named Hyderabad, Guwahati (Region C), Mumbai (Region B) and Lucknow (Region A) were awarded by Mrs. Bhattacharya for their excellent work done in Hindi. General Managers of the Circles Mr. Ashwin Mehta, Mr. Gautam Bhattacharya, Mr. P.C. Kandpal and Mr. Brajesh Verma respectively received their Shield and Certificates.
Three Departments at Corporate Centre i.e. Liaison, Public Relation and Organizational Planning were also awarded by the Chairman  for their excellent performance in Hindi.
An All India Quiz Competition was organized by the Bank in the 1st week of September 2015.
It is quotable that 11,102 Officers/Staff Members took part in the competition. First prize won by the Bhopal Circle Team, While the 2nd & 3rd by the Mumbai and New Delhi Circle Teams. Patna & Chandigarh Circles received the Consolation Prizes. The winners of 5 Hindi Competitions, organized in September 2015 at corporate centre were also awarded in the Function.
Mr. Ashwini Mehra, Dy. Managing Director & Corporate Development Officer welcomed the Guests. In his speech he added that SBI is the Banker to Every Indian. We commit to propagate the popular language of the country i.e. Hindi in the Bank.
Mr. A.V. Brahma Rao, General Manager (Official Language and Corporate Services) presented the quotable works performed by the Rajbhasha Department before the Management. The function ended with Vote of Thanks to the Chair, Guests and Participants by Mr. Pradeep Kumar Bhool, AGM (Rajbhasha).

Posted by orientpublication at Saturday, September 19, 2015
Email ThisBlogThis!Share to TwitterShare to FacebookShare to Pinterest