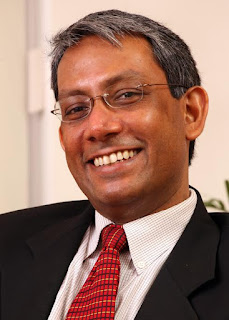 Shri Ravi Venkatesan assumed the charge as Chairman of Bank of Baroda. He is also the founder Chairman of Social Venture Partners India, a national network of philanthropists addressing social problems through venture philanthropy. Shri Ravi is a Venture Partner at impact investor Unitus Seed Fund and serves on the boards of Rockefeller Foundation, Infosys Ltd, and Strand Lifesciences. He is the author of an acclaimed book "Conquering the Chaos: Win in India, Win Everywhere" published by Harvard Business Review.
Prior to this, as Chairman of Microsoft India between 2004 and 2011, Ravi helped build India into Microsoft's second-largest presence in the world. He was instrumental in creating Microsoft India’s Project Shiksha, a computer literacy program which has so far trained over 40 million school children in India. Prior to Microsoft, Shri Ravi Venkatesan was the Chairman of publicly held Cummins India and led its transformation into India’s leading provider of engines and power solutions. He helped establish the Cummins College of Engineering, India's first engineering college for women, in Pune.
Shri Ravi has a BS from IIT Bombay, an MS from Purdue University, and an MBA from Harvard Business School where he was a Baker Scholar. He is a recipient of the Indian Institute of Technology Bombay’s Distinguished Alumnus Award and Purdue University's Distinguished Engineering Alumnus Award. He was voted as one of India's best management thinkers by Thinkers50.

Posted by orientpublication at Saturday, September 05, 2015
Email ThisBlogThis!Share to TwitterShare to FacebookShare to Pinterest