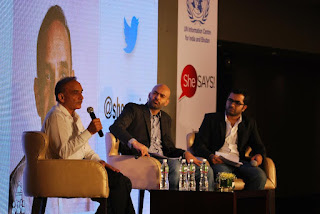 The United Nations Information Centre for India & Bhutan and SheSays together celebrated the International Youth Day on Saturday, 8th August at the Palladium Hotel.
The speakers were eminent personalities from the fields of Public Policy, Business, Entertainment, Media and Social Service and attendees were selected young leaders, entrepreneurs, students, diplomats, social activists as well as media representatives.


SheSays is an initiative aimed to create an environment of zero tolerance to violence against women in India by educating the society with pertinent information regarding the laws and procedure of the Land; further building a network of support that recognises all levels of sexual abuse and provides the necessary means to fight it.
The agenda for the event was Speaking up for ‘her’ and every speaker related their field and experience in order to speak about what’s required in order to champion this cause. A few speakers with excerpts from their sessions at the event are included below.


Dr.Satyapal Singh - "We have an illustrious past, heritage and culture. But we aren't teaching the right values today" to which the hosts, Karan Talwar and Brijul (renowned Comedians and youth influencers) questioned "Looking back, couldn't it be possible that sexual abuse was still rampant but now more so than ever the society is speaking up vocally against it- hence the increase in reported cases"Panel 1: EQUAL AND FULL PARTICIPATION OF WOMEN BEING THE GREATEST UNFINISHED BUSINESS OF THE 21ST CENTURYMs. Erica D'souza (Radio Host) in conversation with Ms. Anju Pandey (Head, Ending Violence Against Women, UN Women), Ms. Zarina Screwvala (Managing Trustee, Swades Foundation) and Ms. Robin Chaurasiya (Social Activist & Founder, Kranti)'From anonymous to autonomous status for women and discussing women empowerment through economic equality'Mr. Thiru Sridharan - 'Educational Institutes need to incorporate women safety as part of its curriculum' Panel 2:  ANALYSING THE CURRENT CULTURE AND ATTITUDE TOWARDS SEXISM AND GENDER.Mr. Rajiv Chandran (National Information Officer, UNIC) in conversation with Dr. Nandita Shah (Co-Director, Akshara Centre) and Parmesh Shahani (Yale World Fellow & Head, Godrej India Culture Lab)Mr. Rajiv raising concerns about more male than female kids being saved at a neonatal stage and directing the conversation to cover points such as 'the concept of India is too wonderfully big to be looked upon in a monochromatic way' raised by Mr. Parmesh Shahani.Mrunalini Deshmukh - NEED FOR UNIFORM CIVIL CODE AS A TOOL FOR GENDER EQUALITY AND IMPACT OF JUSTICE VERMA COMMITTEE''Rape is a rape, irrespective of whether within marriage or outside. Marriage does not mean implied sex'
Trisha Shetty - "Unfortunately we've built a tolerance towards sexual offences. We need to say no from the beginning"


The event ended with the launch of the SheSays website which is the one-stop portal which provides exhaustive information on sexual offences recognised against women by the Indian law, to help one get acquainted with their rights and identify acts of abuse.

Posted by orientpublication at Tuesday, August 11, 2015
Email ThisBlogThis!Share to TwitterShare to FacebookShare to Pinterest