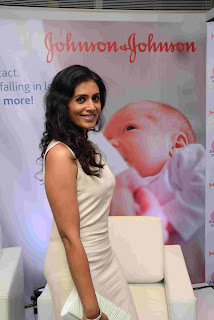 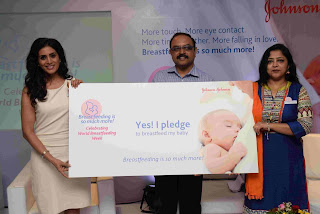 ·         According to a UNICEF Report, only 34 per cent of Indian mothers breastfeed in the first hour
·         Renowned actor and celebrity mother Sonali Kulkarni along with leading doctors came together to support Johnson & Johnson India for a nationwide campaign on ‘I Pledge to Breastfeed’. Actress Devyani also joined the cause
·         Johnson & Johnson will be conducting over 600 healthy baby camps in hospitals and nursing homes across multiple cities to educate mothers about the benefits breastfeeding offers and how it helps develop your bond with the baby

Are you one of the 66 per cent of mothers who don't breastfeed their child in the first month? Did you know that the first hour of a baby’s life is not only the most magical but it is also the most fragile? This is when the baby is at greatest risk of developing complications and breathing difficulties. And, it’s also when they’re in danger of not getting what they need the most: The first breast milk.

Renowned actor and celebrity mother Sonali Kulkarni joined leading  gynaecologist and lactation expert Dr. Anjum Syed  and well-known paediatrician Dr. Girish Bhirud, who came together to support Johnson & Johnson India as they commenced a nationwide campaign‘I Pledge to Breastfeed’ to spread awareness on the benefits of breastfeeding and to encourage Indian moms to pledge to breastfeed their babies.This campaign was launched on the occasion of World Breastfeeding Week and will run through the entire month of August.

As a part of this campaign, Johnson & Johnson will be conducting over 600 healthy baby camps in hospitals and nursing homes across multiple cities to educate mothers about the benefits breastfeeding offers and how it helps develop your bond with the baby.

“We understand how breastfeeding can greatly influence a baby’s happy healthy development. As a brand which has touched mothers and babies across generations, we are happy to be associated with this cause. Like every year, this year too, we are privileged to partner prestigious health care associations such as Indian Academy of Pediatrics (IAP) and Trained Nurses Association of India (TNAI) to spread awareness on this topic and urge every new mom to take a pledge to breastfeed their baby in order to give them so much more” said Ganesh Bangalore, General Manager - Marketing, Consumer Business, at Johnson & Johnson India.

According to a UNICEF Report, only 34 per cent of Indian mothers breastfeed in the first hour. In a land where 1.5 million children under the age of five die every year, only 46 per cent of infants below six months are exclusively breastfed. The report further elaborates how children who are breastfed in the first month are 14 times more likely to survive over those who are given nourishment in the form of formula or any other milk.

The panelists emphasized on the importance of mother’s milk and also spoke about how breastfeeding allows maternal involvement in feeding and maternal confidence; facilitates mother-infant interaction, bonding and attachment pivotal for socio-emotional development of the infant.

According to Dr Girish Bhirud, the need for frequent breastfeeding throughout the day and night ensures that babies remain blanketed with the Power of Mother’s touch. The Journal of the American Medical Association confirms that the power of touch between the mother and child during breastfeeding is the most important for overall cognitive development of the child.

Sonali Kulkarni agreed and added, “A mother’s touch can do wonders for the baby. Young mothers tend to breastfeed their babies only to satisfy their hunger. However, it has various underlying benefits besides gratifying hunger. The sense of touch is the first sense the baby develops right from infancy. Powerful touch makes for powerful beginnings. It’s time for mothers to unite and pledge to breastfeed. I urge mothers to join Johnson & Johnson’s ‘I Pledge to Breastfeed’ movement to create a nation where the children are powered by love, care and So Much More. Because every child deserves a healthy start as there is no better way to do this than a mother’s milk”

Just like her, it’s time for mothers to unite and pledge to breastfeed. This Breastfeeding Week, join Johnson & Johnson to create a nation where the children are powered by love, care and So Much More. Because every child deserves a healthy start as there is no better way than a mother’s milk.

About Johnson & Johnson:
Johnson & Johnson spread its root into India 67 years ago. Since then, the Company has brought many innovative ideas, products and services to improve the health and well-being of people in India.

Generations of mothers in India have placed their trust in Johnson’s® Baby to provide them with safe, clinically proven mild and gentle products for their babies.

Johnson’s® is the undisputed leader in baby care with its Clinically Proven Mild products recommended by doctors for more than 100 years. This heritage of trust is built upon a deep understanding of what it takes to keep the baby’s delicate skin healthy, making Johnsons® Baby one of the most beloved brands amongst mothers in India.

[1]http://unicef.in/Story/96/World-Breastfeeding-Week-2013
[1]http://www.indianpediatrics.net/aug2013/aug-765-770.htm
Posted by orientpublication at Friday, August 07, 2015
Email ThisBlogThis!Share to TwitterShare to FacebookShare to Pinterest