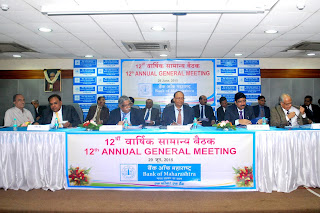 12th ANNUAL GENERAL MEETING OF BANK OF MAHARASHTRA
The Annual General Meeting of the Bank of Maharashtra was conducted on 29th June, 2015.  The Chairman & Managing Director, Shri Sushil Muhnot chaired the meeting. The meeting was also attended by Shri P.A. Sethi, Shareholders Director, Shri Sanjeev Jain, Director, Shri Saydiwal, Workman Director, Shri R. Athmaram and Shri R.K. Gupta, Executive Directors of Bank of Maharashtra.
The agenda of the meeting was transacted & approved by the Shareholders including election of Director through ballot by e-voting. Mr Thamodharan was elected as Shareholder Director.  The Chairman in his speech highlighted the glorious tradition of the Bank, earning the trust of the stakeholders since last 80 years.
He narrated some of the achievements of the bank in Current Year -


During the meeting, certain small section of shareholders tried to disturb the proceedings which were however not supported by other majority shareholders.

Posted by orientpublication at Tuesday, July 07, 2015
Email ThisBlogThis!Share to TwitterShare to FacebookShare to Pinterest