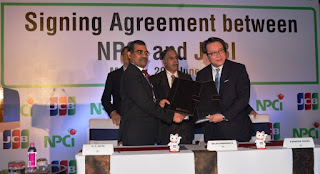 Mumbai and Tokyo
June 29, 2015 - National Payments Corporation of India (NPCI), an organization established by the Reserve Bank of India and being an umbrella for all India’s payments system, and JCB International Co., Ltd. (JCBI), the international operations subsidiary of JCB Co., Ltd., announced today that both parties entered into a strategic partnership for acceptance of JCB card at all NPCI acceptance locations under the NPCI network, which has 1 million card merchants and 200,000 ATMs across India. In addition, the strategic partnership will include the issuance of RuPay/JCB international cards by NPCI member banks that are globally accepted through the JCB network, which will be the first-ever JCB card issued in India.
Leveraging the to-be-established interconnection between the two parties’ payment networks, the scope of the new strategic partnership covers acceptance of JCB cards at NPCI merchants including both retail point-of-sale and Ecommerce and ATMs and issuance of RuPay/JCB international cards by NPCI member banks in India, which can be accepted at around 29 million JCB card merchants as well as ATMs all over the world.
Through this strategic partnership, JCB card’s acceptance coverage in India will reach to 100% for card merchants and ATMs, which will better serve the increasing number of people visiting India especially from Asia where JCBI has a large cardmember base. Meanwhile, the door for international acceptance for RuPay brand will be wider open with the partnership with the JCBI. Currently, approximately 165+ million RuPay domestic cards are issued by 426 banks.
Managing Director & CEO of NPCI, A P Hota said, “NPCI has tied up with a US-based network, in the past, for the international acceptance of RuPay- Discover cards. Through the partnership with JCBI, NPCI can now offer new international RuPay cards with the JCB brand which are widely accepted throughout Asia where JCB has a strong presence in terms of card merchant network as well as exclusive privileges for its cardmembers. The new card, RuPay/JCB international card, will work as RuPay card in India and work as JCB card outside India.”
The two parties now target to launch JCB acceptance business in India around mid-2016 and RuPay/JCB International card issuing business later the same year. NPCI-JCBI strategic partnership would be marked as a key milestone in the Asian payment ecosystem. It will be a win-win situation for both nations of Asia to exchange and achieve card payment dynamism with a view to enhance the acceptance of RuPay cards at JCBI’s network & vice-versa,” added Mr Hota.

Deputy President of JCBI, Kimihisa Imada said, ”We are pleased to enter into a partnership with NPCI in India, which is the most important market in our Asia regional strategy. The acceptance level of JCB cards in India will increase significantly and it will provide a seamless and convenient consumer experience for JCB cardmembers as all the card merchants and ATMs in the country will accept JCB cards Further, issuing of RuPay/JCB card in the market which has 1.2 billion population and strong economic growth will have a significant impact on JCBI’s global business. We believe our extensive card acceptance network and customer oriented services and promotions throughout Asia will be a strong feature of RuPay/JCB international cards. We are confident that the issuance of RuPay/JCB international card will contribute to the Financial Inclusion promoted by the Indian government and NPCI. Based on the strong bilateral relationship between India and Japan, our strategic partnership between NPCI and JCBI will certainly flourish and prosper.”

About JCB
JCB is a global payment brand and a leading credit card issuer and acquirer in Japan. JCB launched its card business in Japan in 1961 and began expanding worldwide in 1981. Its acceptance network includes about 29 million merchants and over a million cash advance locations in 190 countries and territories. JCB cards are now issued in 19 countries and territories, with more than 89 million card members. As part of its international growth strategy, JCB has formed alliances with more than 350 leading banks and financial institutions globally to increase merchant coverage and cardmember base. As a comprehensive payment solution provider, JCB commits to providing responsive and high-quality service and products to all customers worldwide.
www.jcbcorporate.com/english
Note: JCB statistics are as of the end of March 2015.

About NPCI
National Payments Corporation of India (NPCI), which has been set up in 2009 as the central infrastructure for various retail payment systems in India, was envisaged by the Reserve Bank of India as the payment utility for all banks in the country. During the last five years, the organization has grown multi-fold from 2 million transactions a day to 20 million transactions now.  From a single service of switching of inter-bank ATM transactions, the range of services have grown to Cheque Clearing, Immediate Payments Service money transfer (24x7), Automated Clearing House, Electronic Benefit Transfer and a domestic card payment network named ‘RuPay’ to provide an alternative to international card schemes. RuPay card base has gone up to 165 million.
www.npci.org.in
Posted by orientpublication at Tuesday, June 30, 2015
Email ThisBlogThis!Share to TwitterShare to FacebookShare to Pinterest