LG BRINGS G4: THE MOST AMBITOUS SMARTPHONE TO INDIA 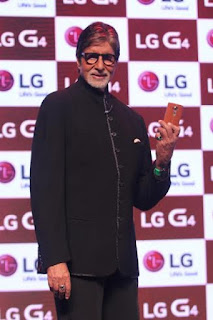 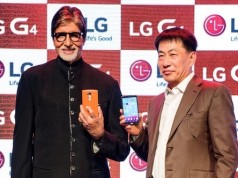 Mumbai, June 19th, 2015 – LG Electronics India has launched it’s much anticipated, its first Leather and DSLR feature packed Smartphone, the LG G4, in India at a gala event at the NSCI Stadium in Mumbai. Bollywood superstar Amitabh Bachchan unveiled the LG G4 in a gathering of approximately 2,000 guests from across India at the launch of the eagerly awaited smartphone device. The G4 is a successor to the super successful smartphone, LG G3 and it further elaborates LG’s endeavor to provide high quality, consumer centric products to the consumers.
On the occasion, Mr. Soon Kwon, Managing Director, LG India said, “We are really proud to bring the LG G4 to India. With this smartphone, we are living up to our promise of Innovation for a Better Life. This is a fashionable, premium smartphone that is more focused on delivering a balanced user experience. With the G4, we are giving users a truly human centric device that combines the analog sensibilities with technologies that deliver real world performance. The G4 is by far the most ambitious phone from LG.”

Prior to the launch of G4 in India, as a part of LG’s largest-ever consumer experience campaign, the smartphone was given to select lucky users in the country to give them a first-hand experience of the device. LG received a tremendous response to this campaign as thousands of consumers across the country participated in it.

With the G4, LG is focusing on delivering a great photography and visual experience, comfortable elegance and a human-centric user experience. The LG G4 camera features a rare-in-smartphones F1.8 aperture lens which allows 80 percent more light to hit the image sensor than in the LG G3. The innovative camera module is paired with the new IPS Quantum Display that is better in every way than the innovative Quad HD display introduced to the world in the LG G3. The LG G4 embodies human sensibility that is clearly visible in its Slim Arc exterior design and graphical user interface.