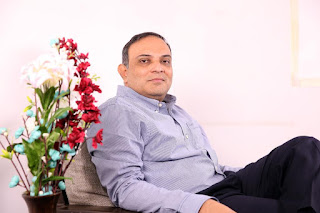 Shop CJ Network Private Limited (“Shop CJ”), a pioneer in home-shopping, is pleased to announce Dhruva Chandrie as its Chief Sales Officer. This appointment is key to further enhance company’s procurement and operations. Dhruva, previously held the position of Chief Operating Officer (COO) for HomeShop18 and has taken charge of his duties.. He brings more than 22 years’ of experience to the role. He will be based in the Mumbai office.

Commenting on his new appointment, he said, "With more players entering the television-commerce market, there is increase in the level of competition. It will be exciting times ahead.” TV Home-shopping is yet to be explored and optimized to its full potential in India. Considering an expected growth rate of 40% and more companies entering the market, the industry is estimated to reach Rs 50,000 crores in the next five years.

Acclaimed by industry peers for quick turnarounds, Dhruva has driven many other companies’ growth on an average three times and multiplied profitability, turning loss making companies into investor worthy enterprises. He comes onboard after successful stints across sectors such as, media, retail, automobiles, and petroleum retail, working with companies including, Tata, Crompton, Videocon Groups, Reliance Industries, HomeShop18 and The Mobile Store, at leadership positions.

Making the announcement, Kenny Shin, CEO of Shop CJ commented, “Dhruva brings a diverse set of leadership skills, extensive operations expertise and a successful track record that we will leverage across the company. His experience and expertise will not only strengthen our organization but will help us grow the company into the number one Home-shopping player in India.”
An alumnus of IIM Lucknow, Dhruva has a B.E. (Hons.) in Electrical & Electronics from BITS Pilani. His hobbies include painting & solving crossword puzzles.
Currently, Shop CJ reaches more than 6.5 crores households in India and claims 40% of the Rs 2,500 crore market, with the company’s sales growing 40% annually.
Posted by orientpublication at Thursday, June 25, 2015
Email ThisBlogThis!Share to TwitterShare to FacebookShare to Pinterest