​st Feb ​
‘Baji’ is all set for a 6thFebruary 2015 release across theatres in Maharashtra. The film which marks the return of Shreyas Talpade as an actor to Marathi cinema after eight years and boasts of ace stunt director from the south popularly known as ‘Stunt Selva’, for the first time in Marathi cinema.

Written and directed by Nikhil Mahajan, of Pune 52 fame, the movie which is already amongst next year’s most anticipated films, also stars Jitendra Joshi as ‘Baji’s’ main nemesis and Amruta Khanvilkar as his leading lady. Furthermore, helmed by Atif Afzal, the film’s soundtrack features industry’s popular singers Chinmayi Sripada, Adarsh Shinde, Bela Shende, Shalmali Kholgade, Adarsh Shinde and Abhijeet Sawant
Commenting on the film, Shreyas Talpade said, “After Iqbal, Baji has thus far been my most challenging and fulfilling acting assignment till date. Perfectionist Nikhil Mahajan and the super energetic Stunt Selva have pushed me to limits that I never knew I could achieve and I am very grateful to them for that. Apart from the makers and my really talented co-stars who are definitely amongst the most fantastic actors I have worked with, I dedicate this movie and my performance in it to all my fans who have patiently waited so long for my return to Marathi cinema. I am absolutely confident they will definitely not be disappointed and would get far more than they expect.” 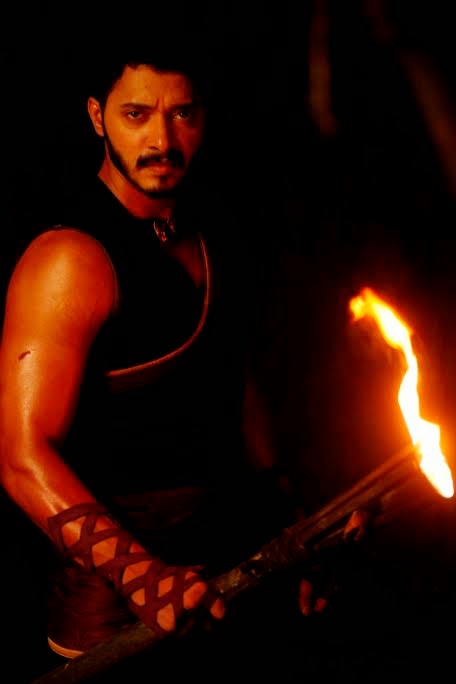 An epic blockbuster and pure family entertainer ‘Baji’ is shot across picturesque Konkan locales. It is an action-adventure-romance laced superhero vigilante about and hidden treasures, based on the legend of a man who took upon himself to protect the common man against oppression and injustice in this small village in Shrirangpur. No one knows who he is or where he comes from, but whenever the village is in peril, Baji has always come to its rescue. His sword, his bow-arrow and his white stallion live on to define him.
Talking about the film director Nikhil Mahajan said, “After Pune 52, I was very sure that I wanted to work on a good commercial epic blockbuster that would not just set the cash bells ringing at the box office but would also go down as one of the finest movies ever made in Marathi. Baji to me is that larger than life project. Not only has the experience on working on this movie, my very second, been very fulfilling and a dream come true, but I also got to work with the powerhouse actor that Shreyas is and the super talented Jitendra and charming Amruta.”
Presented by DAR Motion Pictures, in association with Virtue Entertainment, Baji is produced by Arun Rangachari, Vivek Rangachari, Amit Ahirrao, Deepti Talpade, Suhrud Godbole, Hrishikesh Kulkarni and Nikhil Mahajan and is scheduled to hit the silver screen on 6th February 2015. Other key credits include Writer and Director: Nikhil Mahajan, Dialogues: Shrirang Godbole, Original story: Nikhil Mahajan & Suhrud Godbole, Director of Photography: Vasu Rane, Editor: Abhijeet Deshpande, Music: Atif Afzal, Lyrics: Shrirang Godbole, Co-Producer: Ayush Maheshwari and Executive Producer: Pavan Malu (Blue Drop Films).
Posted by orientpublication at Monday, February 02, 2015
Email ThisBlogThis!Share to TwitterShare to FacebookShare to Pinterest