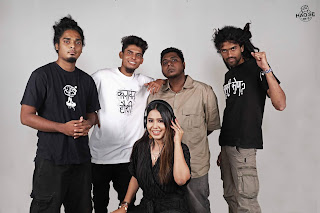 The multi-platform property to include pan-India gigs, audio and video podcasts, inspirational videos and masterclasses

#HaqSeHipHop will celebrate the success stories of India’s top hip-hop artists, visionaries and emerging talent by means of an audio and video podcast, an inspirational video series, masterclasses and pan-India concert series.

Rolling Stone India and Qyuki have been early supporters and stakeholders in India’s hip-hop ecosystem from its fledgling days, and with #HaqSeHipHop, both endeavor to give the diverse hip-hop voices in India a definitive mouthpiece they can claim as their own.

Long before hip-hop attracted mainstream attention, Rolling Stone India consistently employed its editorial platform to promote talent and report every development in the scene -- the magazine was the first to famously feature emerging hip-hop talent on its cover in 2016, following it up with another cover in 2019.

Says Nirmika Singh, Executive Editor, Rolling Stone India, “The #HaqSeHipHop property is our way of honoring the hard work, hustle and hope in hip-hop. We are at the cusp of a music revolution in India and its biggest impact is currently being witnessed in hip-hop. As curators of pop culture, we want to tell as many compelling stories as possible – via podcasts, gigs and masterclasses.”

As India’s premier digital media enterprise, Qyuki’s contribution in nurturing budding hip-hop talent is unparalleled. Together with Universal Music, it is the co-founder of The Dharavi Dream Project(TDDP), a non-profit committed to the promotion of music and arts, which runs the After-School of Hip-Hop, Asia’s largest hip-hop institution where under-resourced artists are equipped with knowledge and skills of rap, bboying, beatboxing, DJing and graffiti.

Samir Bangara, Co-Founder & MD, Qyuki, says, “Since the birth of hip-hop in the late Seventies, its form and meaning have always been challenged and redefined by artists. To preserve the true spirit of expression as a birthright, we conceived ‘Haq Se’ (by right) which specifically promotes independent hip-hop talent. Our investment in promoting local hip-hop started with The Dharavi Dream Project six years ago along with Universal Music Group and with #HaqSeHipHop, we want to widen the platform and nurture the incredible diversity in the genre from across the country.”

#HaqSeSeekho Masterclass:
Hip-hop workshops conducted by top artists at the After School of Hip-Hop run by The Dharavi Dream Project. It is Asia's largest hip-hop school where over 100 budding artists learn rapping, bboying, beatboxing, DJing and graffiti.