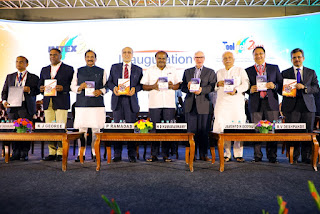 Mumbai, 25th January, 2019: Nineteenth edition of IMTEX exhibition, ‘IMTEX 2019’ and twenty-first edition of Tooltech ‘Tooltech 2019’ organized by Indian Machine Tool Manufacturers’ Association (IMTMA) was inaugurated today at Bangalore International Exhibition Centre (BIEC), Bengaluru. This is the largest IMTEX ever and IMTMA is celebrating 50 years of IMTEX.
The exhibition was inaugurated by Shri H.D. Kumaraswamy, Hon’ble Chief Minister of Karnataka, Shri R.V. Deshpande, Minister for Revenue, Government of Karnataka, Shri K.J. George, Minister for Large & Medium Scale Industries, Government of Karnataka, Vikram Kirloskar, Vice President, Confederation of Indian Industry, and Ram Venkataramani, President, Automotive Component Manufacturers Association of India. Jamshyd N. Godrej, Chairman, Exhibitions - IMTMA, P. Ramadas, President, IMTMA, Indradev Babu, Vice President, IMTMA and V. Anbu, Director General & CEO, IMTMA were also present at the inauguration.
In his welcome speech Mr. Godrej said, “IMTEX creates a welcoming environment to everyone who comes to the exhibition. It shows industry in a different light and IMTEX is an expression of showing a new India and what its industry is capable of.”
Shri Kumaraswamy recollected that IMTEX had entered Bengaluru 12 years ago and he had the privilege of inaugurating the show and opening BIEC. “The exhibition has been a gateway for attracting investments in Karnataka since then,” he added. Shri Kumaraswamy also said that Bengaluru was historically a manufacturing hub and is making its mark as a startup and biotech hub as well. “To give impetus to aerospace vertical Karnataka has announced an aerospace policy that has identified investment potential of around 10 billion dollars in the sector during 2013-2023 which is expected to give a boost to the manufacturing industry in Karnataka.[1]
Shri R.V. Deshpande said, “Karnataka has always laid out a red carpet to investors wanting to do business in the state. The state has a pro-industry policy, which has helped industries to thrive.”
Supporting Shri Deshpande’s views Shri K.J. George said that the state has been in the forefront of many ventures such as setting up the world’s largest solar park, launching booster kit for start-ups, setting up an exclusive machine tool park, etc. He called upon the manufacturing industry to do their business in the state including their capacity expansions.
CII Vice President Vikram Kirloskar said that exhibitions will never become obsolete as machines will always be required in the manufacturing industry. Technologies are needed to enhance productivity. Large-scale exhibitions such as IMTEX will provide all this in one place.
ACMA President Venkataramani said that ACMA and IMTMA will continue to work to understand and provide solutions to ever growing demands of the auto component industry.
Marking 50 years celebration, IMTMA has planned a series of activities as part of the show including several new initiatives all of which will be unravelled in the week from 24th January to 30th January 2019.

Celebrating Five Decades of Excellence
Celebrating 50 years of IMTEX, IMTMA has set up an Experience Zone adjacent to Hall 4 in BIEC. The experience zone is a collection of IMTEX archives including display of vintage machines from a bygone era, pictures and a short film of IMTEX journey.
Celebrating the Golden Jubilee of IMTEX, IMTMA is releasing a Coffee Table book at Hotel Taj Westend in Bengaluru on 25th January 2019. The coffee table book captures the ethos of IMTEX and traces its growth over a timeframe of 50 years since 1969. IMTEX 2019 is also featuring two robots. The robots will move and gesticulate, talk to people and answer their queries and move around in the campus.

Posted by orientpublication at Monday, January 28, 2019