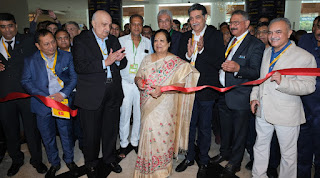 There have been many export promotion councils for various fields of textiles & clothing. As Technical Textile is a new subject, the government is thinking to form a separate export promotion council for Technical Textiles, said Union Minister of States for Textiles Smt. Darshana V. Jardosh, during inaugurating CMAI FAB SHOW on 11th April 2022 at Jio World Convention Centre, BKC, Mumbai.

The Minister further stated that during the previous government, there was no proper coordination between different ministries and nodal agencies were not functioning properly. Now, the present government under the able leadership of Prime Minister Narendra Modi, all concerned departments and ministries have smoother coordination among themselves. Hence there is no need for a new textile policy.

While referring to TUF (Textiles Up gradation Funds) Scheme, the Minister explained that though the previous government was making announcement of various schemes but not enough provision of funds for such schemes was made. Hence the financial burden of unpaid incentives of previous government has to be met by the present government.

She further said that after the tough period during the corona pandemic, now India is progressing well and 21st century will belong to India. The India has achieved its export targets and now the government will announce shortly the new export targets.

The Minister applauded the initiative of CMAI to organise this first of its kind Show bringing the entire Supply Chain under one roof, and appreciated the efforts of CMAI to serve the Domestic Garment Industry and its members.

Mr. Rahul Mehta, Past President and now Chief Mentor of CMAI (THE Clothing Manufacturers Association of India) said that after the success of National Garment Fairs and the recently launched Vendor Sourcing Fair, CMAI has first time organised CMAI FAB SHOW. (Fabrics, Accessories & Beyond) during 11th to 13th April 2022. It has 200 participants. Visitors and buyers from 8 counties are visiting the show. The Fair has 3500 online registrations before the commencement of the Fair. More than 5,000 Garment Manufacturers, Exporters, Retailers with private labels and Traders are expected to visit the Fair.

Mr. Rajesh Masand, President – CMAI informed that The CMAI FAB SHOW has been supported by Two of the biggest Associations in the Fabric Supply Chain – the FABEXA from Ahmedabad, and SGCCI from Surat. FABEXA, an arm of Ahmedabad’s famous MASKATI CLOTH MARKET MAHAJAN has participated with nearly 55 of its members, bringing to The CMAI FAB Show the full might of Ahmedabad’s strength in Cotton and Natural based Fabrics. On the other hand, SGCCI – the South Gujarat Chamber of Commerce and Industry, one of Gujarat’s

most dynamic and active Industry Associations, has backed up this show with close to 45 of its members from Surat participating. Surat, often described as India’s answer to China in Fabric development especially in the MMF based fabric category, show cased   its latest Developments and Innovations in MMF Fabrics.

A unique addition to The FAB Show was  the THINK OUT OF THE BOX Section, with 4 exciting and Scintillating Seminars on a variety of Subjects covering Consumer Trends, Technological Developments, and Global Fashion Landscape. The speakers  included some of the biggest names in the Garment Industry, along with speakers from Bangladesh, Turkey, and The Netherlands.

Posted by orientpublication at Tuesday, April 12, 2022
Email ThisBlogThis!Share to TwitterShare to FacebookShare to Pinterest