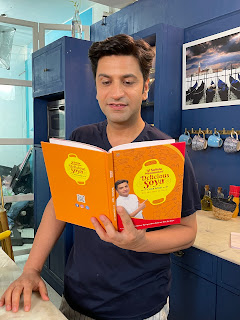 Access the cookbook online and get exclusive recipes by Chef Kunal exploring a variety of interesting ways to cook up a storm using the incredibly versatile -Soya!
19th, July, 2021: Saffola Mealmaker is excited to announce the launch of its very own e-cookbook: ‘Saffola Mealmaker Delicious Soya Cook Book’ featuring some of our favourite ways to use the versatile, healthy and tasty ingredient soya specially curated by renowned celebrity Chef Kunal Kapur. This e-cookbook has over 50+ easy-to-make recipes which guarantees lots of experimentation and fun in the kitchen. With its successful launch in West Bengal, Saffola Mealmaker Soya Chunks has transformed soya into the benchmark of taste and texture especially with its Super Soft Technology which makes them tender and juicier thereby offering superior taste
Since the past year, home cooking has gained momentum. People have been drawing inspiration from Celebrity Chefs and Home Chefs to experiment with and cook yummy meals. The newly launched Saffola Mealmaker Delicious Soya Cook book by Chef Kunal Kapur takes you through a wholesome culinary experience of its own by offering more than 50 never-tried-before soya recipes ranging from Morning Breakfast Delights, Chinese Appetizers, Healthy Meals & Snacks to Kids Favourites, Soya Desserts and exclusive Chef’s Specials that’ll open new doors to the traditional use of Soya and bring some much-needed variety to the menu.
Commenting on the launch of the innovative Saffola Mealmaker Soya Cook Book, Celebrity Chef Kunal Kapur, said, “I am delighted to be associated with Saffola Mealmaker Soya Chunks to curate this innovative Soya Cook Book bringing taste and a plethora of flavours together. The Saffola Mealmaker Soya Cook Book has some innovative soya recipes that are not only healthy but offer a wholesome treat for the entire family. From my personal favorites like Soya Biryani and Soya Gravy Chaap to some of the most popular local Bengali and Northern cuisines, we have specially curated this cook book to sort out all your breakfast, lunch and dinner meals, thereby turning everyday family meals into extraordinary family favourites.”
Saffola Mealmaker Soya Chunks is now available on our Saffola Store along with other major e-commerce platforms and nearby stores. You can also download the e-cookbook on https://saffola.marico.in/soyarecipes or by scanning the bar-code on
Posted by orientpublication at Tuesday, July 20, 2021
Email ThisBlogThis!Share to TwitterShare to FacebookShare to Pinterest