Rajkummar Rao and Patralekha Reveal the secret of Their Successful Relationship – a couple that #ShareTheLoad! 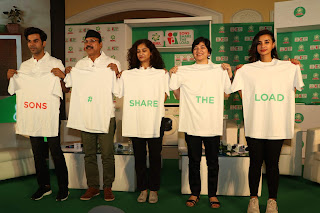 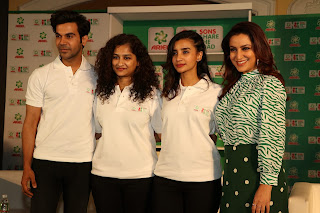 Mumbai, February 8th, 2019 – Ariel has been unearthing the reality of inequality within households since 2015 with their award-winning movement #ShareTheLoad. Today, Ariel hosted a panel discussion with over a 100 mommy bloggers and media present to discuss the prevalence of gender disparity in India and the need for Sons to Share The Load. The panel that comprised of actors Rajkummar  Rao, Patralekha, Director Gauri Shinde, BBDO Head Josy Paul, and Sonali Dhawan, Marketing Director, P&G India, brought forth insightful conversations and personal anecdotes on the disparity within households, and changing times today. They shared that while more men today are sharing the load than ever before, we are still many steps further from the ideal state of an equal future.

The panel also went deeper into the latest Ariel film- Sons #ShareTheLoad that raises yet another pertinent question in this direction - Are we teaching our sons what we are teaching our daughters? - the film urges mothers of today’s generation to raise a generation of equals. The newly-released edition of #ShareTheLoad, has resonated with many parents, newly married couples, influencers and has already received tremendous support and commendation from audiences across India. The film that released on January 24th, 2019 has already garnered 15 Million views in total.

The panelists discussed the reasons for this disparity and talked about the upbringing of children. Even within the same progressive households, there is often a difference in the way our sons and daughters are being raised. Of late, daughters are being raised to be strong, independent and confident to excel in all fields.  But they continue to be the primary caretakers of households once they get married. This places unbalanced expectations and burdens on them, which can get in the way of their professional growth. While the society is changing, there is not always enough attention given to raising sons differently. For example, teaching them some new life skills like laundry or cooking, to help better manage their future and make them advocates of household equality. If not taught to #ShareTheLoad, the sons of today become the husbands of tomorrow, who may not be prepared enough to be equal partners.

Showcasing statistics revealed by a survey by an independent 3rd party in 2018, the panel also discussed some inherent differences in the male and female approaches. 72% of women believe that weekends are for grocery shopping, laundry and getting homework done while 68% of Indian men believe that weekends are for relaxation. Coming to daily household tasks like laundry, many women continue to single-handedly take responsibility of all the chores. 68% of women come back from work and do laundry regularly, while for men, this number is only 35%. In fact, 40% of Indian men don’t know how to operate a washing machine. Further, more than half of the men agreed that they don’t do laundry as they never saw their fathers do it. The survey also revealed that Seven out of Ten women* in India reconsider additional responsibilities at work in order to balance the responsibilities at home.  With the belief that mothers have a strong empathetic point of view, the panel urged this generation of mothers to raise their children as a generation of equals. Ariel continues to have this conversation by making laundry the face of the movement against inequality within households, because with Ariel, anyone can get best results no matter who does the laundry.

Supporting the #ShareTheLoad movement, actor Rajkummar  Rao said “The Sons#ShareTheLoad film really resonated with me. With this latest ad Ariel has not just raised an issue, but has also provided a pathway, so that we can move society to a more equal tomorrow.  My mother always raised me to be an equal – starting with sharing to-do lists with my sister at home as kids. I thank my mother for having set the right example for me, and for ensuring I can stand her proudly today to set an example. And this has always driven me to ensure that my relationship with Patralekha is that of equals, inside the home and outside of it! Thank you, Ma, for making sure that your son knew how to #ShareTheLoad!”

“Raj is an amazing partner, he inherently believes in sharing the load and has proved that time and again throughout our relationship. He believes, says, and demonstrates that we are truly equal partners – that we are in it together and we have balanced roles to play. But, partners like Raj shouldn’t be exceptions, they should be the norm.  #SharingTheLoad should be the norm. I am glad Ariel has continued to drive this conversation, as we can already see change!” Added actor Patralekha, giving the #ShareTheLoad movement a big Thumbs up!

Gauri Shinde, Director of the Sons#ShareTheLoad film said “The #ShareTheLoad movement is the need of the hour, this is a conversation that needs to be an ongoing one to make a visible difference in the gender disparity we see in society. I am aligned to Ariel’s vision of a progressive future and happier households where both men and women share the load. So, with this film we have underlined the role for this generation’s mothers in raising their sons like they have been raising their daughters.”

Commenting on the Movement, Sonali Dhawan, Marketing Director, P&G India, and Fabric Care said,
“Share the Load has always sought to address the inequality within the household, by raising questions that make the viewer think, introspect and act. We have already garnered 15MM views, and that shows how the film is truly resonating with our audience. This year, we are focusing on the younger generation, who if raised in a balanced manner, will grow up to be a generation of equals - the onus lies on our generation of parents.  As a mother of a boy and a girl, I truly believe this is possible. #ShareTheLaod is not just a regular campaign, it's a movement for social change, where men and women have equal responsibilities, and equal ownership of chores. Laundry is almost the face of the change we are trying to drive across the country. Because with Ariel, it’s so simple to do laundry that there’s no reason for anyone to not share the load!”

Josy Paul, Chairman & Chief Creative Officer BBDO adds, “We are thrilled to be here to celebrate the early success of Ariel’s Sons#ShareTheLoad. The latest figures suggest that India has given a thumbs-up to the film and its transformational message. We believe there’s more to be done. Along with Ariel, we commit to drive this social change with thoughtful actions that'll help mothers raise a generation of sons who grow up to be equal partners.  The statistics reveal that there is a definite change happening in society and as the creative agency of the movement, we will ensure we continue to trigger further realization.”

Ariel #ShareTheLoad movement started in India to address the household inequality that exists in our society. In 2015, Ariel raised a very relevant question - ‘Is laundry only a woman’s job?’ to draw attention to the uneven distribution of domestic chores. With the 2016 ‘Dads Share The Load’ movement, the conversation was aimed at unearthing the reason for the disparity, which is the cycle of prejudice passed down from one generation to the next. The movement has had a significant impact over the years, with more men sharing the load than ever before. In 2015, 79%* men thought household chores are a women’s job. In 2016, 63%* men thought household chores are a woman’s / daughter’s job and ‘outside’ work is man’s / son’s job. In 2018, this number has reduced to 52%*. Despite progress, more work is still to be done. Towards this, #ShareTheLoad recently launched the third leg of the movement with Sons#ShareTheLoad because, with Ariel, laundry becomes the easiest chore to start sharing the load with!

Sons #ShareTheLoad 2019 campaign is based on an uncomfortable truth that’s so true for today. In the film, the mother’s realization of an unspoken social conditioning and her determined resolution is thoughtful, sensitive and a big leap for society. Her simple action gives men one more reason to share the load at home.

With laundry at its center, Ariel’s new communication shows a mother teaching her son to do laundry. Making laundry the face of the movement against this inequality that exists in Indian households, Ariel India with its latest campaign wants mothers to raise a whole new generation of sons who know how to #ShareTheLoad. Because when the sons of today become husbands of tomorrow, they should be equipped to share the load.
Posted by orientpublication at Saturday, February 09, 2019
Email ThisBlogThis!Share to TwitterShare to FacebookShare to Pinterest