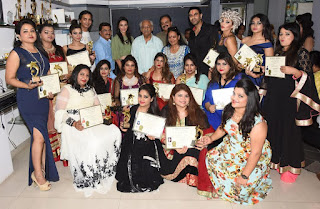 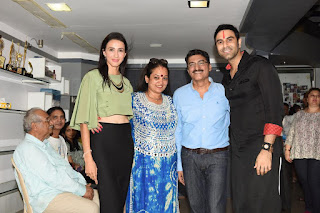 Latch onto their secrets as renowned names in the world of makeup Bharat & Dorris shared their technique for creating contemporary beauty, bringing you the latest looks with drama, glamour and fashion

The annual felicitation ceremony saw the presence of who’s who of Bollywood, Fashion & Television industry comprising- Sandip Soparrkar, Alesia Raut, Pandhari Dada who felicitated the students for their brilliance in hair and makeup. Living up to the teacher’s standards, the students of Bollywood’s make-up gurus & hairstylists Bharat & Dorris will showcased their looks. The students of B&D Academy presented before the people their looks from make-up to hair styling & a special felicitation after a grandeur fashion show.

Holding a penchant for hair and makeup Bharat Godambe of  “B & D”, one amongst the duo says “Today’s show was the annual show where the students from the institute had put in display the best of hair and makeup in the form of fashion show. The knowledge they have absorbed about hair and makeup was exhibited today"

Dorris Godambe of “B & D” exclaims “An artistic background is not necessary but one must have an inborn desire for art and beauty, hence today’s evening was dedicated to the passion for the art”.
Having completed 25 years in the profession, make-up artist & hair stylist, Bharat & Dorris Godambe have followed their passion and broadened their horizons by endorsing their own brand of cosmetics, “B & D”. While this is the regular international practice, it will be revolutionary for the Indian market, as it for the very first time that Indian would see make-up artists endorsing their own line of cosmetics.

Bharat and Dorris, who are known for creating the “flawless look”, are one of the ruling icons of the make-up art today. They have introduced a new age of finesse and detail in film, bollywood, advertisement, fashion show, events like MISS INDIA, MRS INDIA, GLADRAGS SUPER MODEL, FILMAWARDS and many more. Also done numerous covers for fashion, films and lifestyle magazines like Femina, Gladrags, Film fare, Stardust, Cine Blitz, Vogue, Cosmopolitan, Elle, Femina and Verve for celebrities and film actress.

From Miss India pageant to Bollywood, from bridal make-up to ad films, in their many years of work, there isn’t a single actor or actress who has not had the magical touch either inhair or in make-up, from the expert hands of Bharat andDorris. They are the most favored make-up gurus with celebrities like Aishwarya Rai, Sushmita Sen, Rani Mukherjee, Lara Dutta, Priyanka Chopra, Shilpa Shetty, Juhi Chawla, Madhuri Dixit, Shridevi, Kajol, Urmila Matondkar and almost every star and beauty queen clamoring enough for their artistic treatment, which make the women glamorous enough to face the best photographers and cinematographers.

Their clientele includes not only Miss India’s but also the celebrities like Maureen Wadia, Anu Dewan, Neeta Ambani, Gauri Khan, Jaya Bachchan, Yash Avanti Birla, Sheetal Mafatlal and many others. The duo has also won numerousawards like Kingfisher Awards 2001, Iffa Awards 2008 for Best Hair of the year and Best Make-up. Working for campaign like Ponds, Vimal, Bombay dying, Lux, Liril, Nivea, Clinic, Godrej, Garden mills, Raymond have also earned them fame and respect in the ad business.” The year 2007 and 2008 have also seen their contribution to some of the top bollywood movies like “SAAWARIYAN” in which they worked with Rani Mukherjee, Sonam Kapoor and Ranbir Kapoor, “GAJINI” for Jiah Khan and ASIN and last but not the least OM SHANTI OM for Deepika Padukone for which they have won the IIFA Award 2008 for best makeup and hairstyling.
With their invaluable years of experience and magical fingers they have been imparting their knowledge at their school for make-up with a large number of students learning the art of make-up. “”, says Bharat. Bharat & Dorris have become famous not only in India but also at a worldwide platform and hence they are starting an innovative format on a yearly basis to judge hairdressers, hair stylists and makeup artists and award them for their skill and talents. With this the industry will see healthy competition and also the members will get to work with greater names and also under our banner.