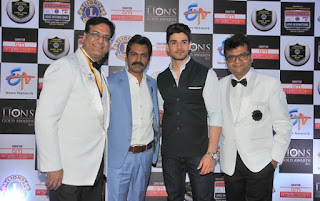 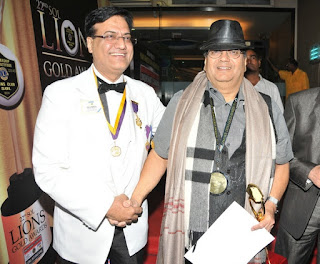 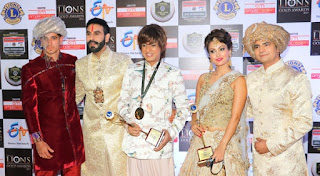 A bold initiative by Lion Raju V Manwani & Ably supported by Lion Aneel Murarka is back again with equal enthusiasm and gesture to honor the winners’ contribution in their respective fields, this time with a view to support and encourage “Swachh Bharat – Clean India”
Lion Raju V Manwani (The Pan India Swachh Bharat Co coordinator: 2015 – 18: for L C C I), exclaims “We are thankful to our Second International Vice President Lion Naresh Aggarwal for having taken on the gauntlet of “Swachh Bharat” on behalf of the L C C I, and giving us a chance to do our bit for the same, wherein we will spare no efforts whatsoever to ensure fructification of this noble dream”.

The extravaganza took place at one the plush auditoriums of suburbs suitable for the gala. The award ceremony commenced by capturing the essence of the Indian Rituals by lighting the auspicious lamp as a favorable start and sign of future success for the evening.

The “22nd Lions Gold Awards” was anchored by the very charismaticSiddharth Kannan & Aafreen Vaz who spinned his magic and kept the audience engaged with his wit, energy & charm. Apart from Siddharth’s anchoring the extravaganza also witnessed captivating performance of effervescent & charming troupe performing on Ganesh Vandana seeking blessings and dancing away.

Adding to the merriment the evening witnessed engaging performances which included Akshat Singh who caught the attention of the audience with his electrifying dance moves. Setting the tone for the evening one of the most loved dancing duo Sonali & Sumanth performed and flaunted their moves keeping the crowd entertained.

Holding a penchant for fashion, designer Rohit Verma spinned his magic setting the color wheels in motion in Royal shades. The attendees were left wowed by the models walking the catwalk with inspiring creative colors and stunning styles at the much awaited “22nd Lions Gold Awards”.   Rohit Verma’s collection offered a slew of sartorial designs glorifying the theme tulsi in his designs. A true Indian at heart designer, Rohit Verma incorporatedluxurious Indian fabrics, color, and texture in his designs with Nisha Rawal and karan as show stoppers

In the arena of professional dancers, we had our very own “Super Star”- Sandip Soparrkar who grooved the tunes of salsa.

The award show paid a tribute to the legendary director Mr.Subhash Ghaifondly known as “The Showman”. The performance made the audience walk down the memory lane by highlighting the essence of his filmography.

Vilas Nayak, who has triumph upon the hearts of the nation with his speed painting, exhibited his talent spreading the message about clean India. And surprised Ranveer Singh by making his portrait in two mins The stage seemed to be the hub of talents with a brave display of martial arts. In keeping with the theme of the evening “Swachh Bharat- Clean India” the event ended with Savy dance group’s performance.
Few awarders were Karanvir sharma , Shilpi Sharma , Sejal Mandavia etc
“22nd SOL Lions Gold Awards” is a musical extravaganza recognizing and honouring exceptional contributions in fields as diverse as films and television, sports, medicine, entertainment, construction etc.

With the awards being broadly classified in three categories: Films, Television and Special, the gala didn’t  leave any stone unturned in order to insure to honor and felicitate pioneers from different fields. The Film Category recognized the path breaking performances in respective films and felicitates them. The TV Category comprised stellar portrayal of various stars on the small screen. The Special category encompassing fields as diverse as Sports, Bravery, Business, Medicine, IAS/ IPS etc.

Over the years, the SOL Lions Gold Awards have been accorded sheen and class thanks to the presence of Top – Of – The line celebrities from the worlds of film and television and renowned personalities from different strata of Society