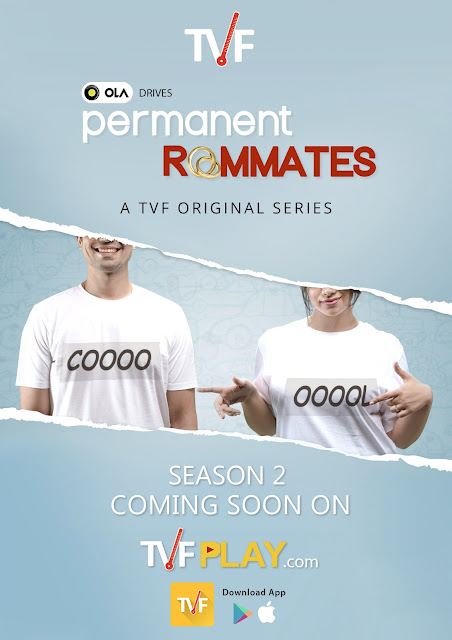 THIS VALENTINE’S DAY – SUNDAY, FEBRUARY 14, 2016
Web Series Pioneer, TVF to Launch Season 2 of
the Most Viewed Branded Web Series in the World
PERMANENT ROOMMATES
OLA to Drive Season 2 of the Popular Web Series

Thursday, January 28, 2016 -- Founded by Arunabh Kumar, Creative Experiment Officer (CEO) and one of India’s most successful new-age media entrepreneurs, TVF (The Viral Fever) is the first company in the country to focus on youth entertainment to create progressive and new-age content - pioneering web series, a new genre of online entertainment. Come Valentine’s Day, Sunday February 14, 2016, TVF will launch Season 2 of its much awaited, much loved web series – PERMANENT ROOMMATES – in association with OLA, India’s leading mobile app for transportation.
Permanent Roommates was India’s first web series to launch in October 2014. And it will be the first web series in India to launch a second season.
Here is the trailer of Permanent Roommates Season 2 – http://bit.ly/TVFPR-S02Promo
You can enjoy Permanent Roommates Season 2 on TVF’s online destination, www.TVFPlay.com
The second promo will be launched in the second week of February, leading up to Valentine’s Day.

EXPECT THE UNEXPECTED...
PERMANENT ROOMMATES SEASON 2 promises a different experience. It will try to break a lot of relationship stereotypes with its ‘third kind of love story’ storyline – with no tragic deaths nor a certain happy ending!  Season 2 will include a total of 8 episodes, each episode of an average duration of 30-40 minutes and an expected number of views between 4-5 million per episode!
When Season 1 of Permanent Roommates, India’s very first web series was launched in October 2014, it received global accolades and went on to become the most viewed branded web series in the world! It was listed among the highest rated TV Series in 2014 on IMDb. To date, Permanent Roommates is the 2nd most watched long form web series in the WORLD (after 'Video Game High School') on YouTube -- with over 12 million total views for 5 episodes, with every episode having more than a million views! And, is the only show after TVF Pitchers to feature in the IMDb Top 250 TV series in the world at #174 after TVF Pitchers at #22.
Having pioneered the web series genre in India and having created two very successful web series Permanent Roommates and Pitchers, Arunabh Kumar, CEO and Founder of TVF says, “Valentine's Day is pretty much the perfect day to continue the "third kind of love story" that Mickey and Tanya introduced us to in Permanent Roommates, Season 1. Permanent Roommates 2 is the first sequel of any web series made out of India. The first season got nearly 12 million views and was a testament to the love our viewers had for this funny, relatable urban love story. With PR2, we are moving up to the next level and are really excited to continue this story which the entire family can watch together. With a host of surprise artists, and a unique story. And thanks to Ola, you'll be in for quite a ride this season!"
Biswapati Sarkar, Creative Director, TVF and Writer, Permanent Roommates, added, “It is always a challenge to return with a sequel of something, which is already so admired by people. We wanted to do a Season 2 only when we have a storyline which is better than the earlier season. This season is more mature in terms of content, and deals with several different aspects of modern day relationships. We have been able to put together a brilliant additional cast alongside the existing one. To manage public and personal expectations along with the shoot schedule has always been a tough task, but with a brilliant crew led by Deepak Mishra, it seems feasible for now. We're trying to break a lot of stereotypes usually associated with a romantic comedy, let’s see how far we can go with it.'
Sudarshan Gangrade, VP, Marketing at Ola says, “TVF has spearheaded the use of digital as a media platform and pioneered original long-form content in India. Their approach to story-telling and quality of content helps them engage closely with millions of digital-savvy youth and we are happy to work with TVF.”

About TVF
Leading the web series revolution with India's two most successful series, with over 17 million views, overtaking global shows like Seinfeld, House of Cards on IMDb rating is TVF (The Viral Fever).  TVF is the First Online Network to get A+ grade Bollywood celebrities from SRK and Anurag Kashyap to Ayushmann Khurana for their content.
In less than 3 years, TVF has created over 12 of the country’s popular online content properties – TVF Originals – from Qtiyapa that has a subscriber base of over a million to the hugely popular, Barely Speaking with Arnub, the world record breaking branded web series, Permanent Roommates, Chai Sutta Chronicles, The Making Of Theatrical Trollers, and more recently in 2015 with TVF-Pitchers.
In 2013, TVF was the only Indian YouTube Network to represent India at the first ever International YouTube Fan Fest. Arunabh was also the only representative from South Asia to be invited to the 2015 Global Creators’ Summit in New York. TVF was also presented the inaugural Award for BEST Brand & Creator Collaboration in India in 2015.
More recently, Arunabh, who is an IIT Graduate, was featured in Fortune’s "40 under 40" List of India's top Business Leaders of 2015 along with "GQ's Most Influential Young Indian" and has been instrumental in redefining entertainment for the youth as well as driving the online content revolution in India over the last 3 years.

About Permanent Roommates
In October 2014, TVF, the first company in the country in the area of Youth Entertainment to create Progressive and New-Age Content -  pioneering a new genre of online entertainment -- launched the country’s very first web series – Permanent Roommates.
Permanent Roommates received global accolades and went on to become the most viewed branded web series in the world! It was listed among the highest rated TV Series in 2014 on IMDb.
To date, Permanent Roommates is the 2nd most watched long form web series in the WORLD (after 'Video Game High School') on YouTube -- with over 12 million total views for 5 episodes, with every episode having more than a million views! And, is the only show after TVF Pitchers to feature in the IMDb Top 250 TV series in the world!
Next month, in February 2016, TVF is set to launch Season 2 of the world record breaking branded web series, Permanent Roommates.
This will be the first web series in India to launch a second season!
www.TVFPlay.com
www.tvfmedialabs.com
http://www.youtube.com/user/theviralfevervideos
https://www.facebook.com/sabqtiyapahai
https://twitter.com/theviralfever
http://in.linkedin.com/pub/arunabh-kumar/29/918/707

About OLA
Founded in Jan 2011 by IIT Bombay alumni Bhavish Aggarwal and Ankit Bhati, Ola (formerly Olacabs), is India’s most popular mobile app for transportation. Ola integrates city transportation for customers and driver partners onto a mobile technology platform ensuring convenient, transparent and quick service fulfilment. Ola is committed to its mission of building mobility for a billion people. Using the Ola mobile app, users across 102 cities can book from over 350,000 vehicles across cabs, auto-rickshaws and taxis on its platform. The app is available on Windows, Android and iOS platforms. Ola recently acquired TaxiForSure, India’s second largest cab aggregator, which continues to operate as an independent brand.
Please visit www.olacabs.com for more information.
Posted by orientpublication at Friday, January 29, 2016
Email ThisBlogThis!Share to TwitterShare to FacebookShare to Pinterest