10th Edition of the Blind Man Car Rally, an Annual Initiative by Round table India (RTI) 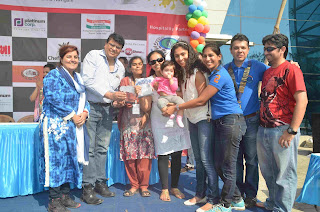 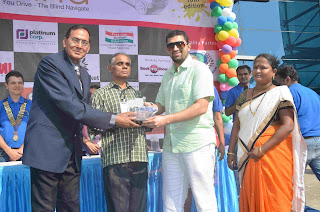 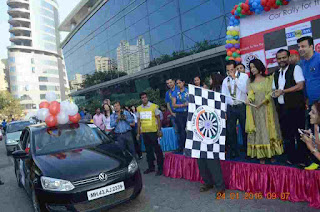 Mumbai, 24th January, 2015: Round table India today successfully concluded the 10th Edition of the Blind Man Car Rally (BMR) a unique car rally in which drivers are navigated by visually impaired navigators. The navigators decode the rally route in Braille script and give directions to the driver. This year the route was made more challenging to test & enhance the skills of the visually impaired navigator.
The rally which covered a distance of 45 kms in Mumbai was flagged by Ms. Amruta Fadnavis, wife of Mr. Devendra Fadnavis, Honorary Chief minister of Maharashtra, from NSCI Club, Worli. The event was also honored by the Ace Percussionist Sivamani. Over 100 visually impaired navigators participated in the rally.
Commenting on the occasion Mr. Viral Kedia, Immediate Past Chairman, Round Table India, stated “Round Table India would like to thank all the participants and sponsors in making the 10th edition of BMR a huge success. RTI has been dedicated in providing education to the underprivileged Children. Round Table International started the ‘National Freedom Through Education’ initiative in 1996, impacting 4.80 million underprivileged Children. We have completed projects with 1799 Schools, 5050 Classrooms with an Outlay of Rs.150 Crores, through the various projects we have undertaken so far. The success of the Blind Man Car, our annual fund raiser ensures the upliftment of underprivileged children through various educational programmes RTI undertakes.”
Taking the pole position was Chhaya Gandhi along with her navigator Nazneen Shaikh. The second position was claimed by Ambareesh Mandelia & navigator Kedu Wankade. The third position was shared by Mukund Ranganathan & navigator Dadabhau Kutte along with Ripul Bhimjiani & navigator Hussain. Finishing first in the all ladies team were Deepa Damodaran and her navigator Vanita Pohar.
Entertainment was arranged for all participants at the BMR for the first time through the course of the event with a live show by standup comedian Huller along with a skit on AIDS awareness, performed by students from “Holy Mother English School”. This school is based in the slums of Malwani -Malad, Mumbai. RTI also organized a dance show by kids of their associated school - Balnandavan Nisarg Shala, Dahanu.
The rally, designed to create general awareness about the day to day challenges faced by visually impaired people, was infused with awareness about social responsibilities displayed through some unique creative messages, including Sawach Bharat, Clean India, All Women Team to name a few. The funds raised through this rally will be used for various social causes.


Sponsors for the 10th Edition include: - Platinum Corp, Kellogg’s India, KB & BH Hospital.
Technical Partner: Sportscraft (www.sportscraftindia.com)
About Round Table India:
Round Table India (RTI) is a member body of Round Table International. While the RTI is spread over 65 countries in the world, the Round Table India is active in as many as 75 cities in India and has 2500 members. Unique as it is, the RTI employs all donations it receives for its projects and not for its administrative expenses. The organization has a long term project-Freedom through Education under which schools are built for the underprivileged children. It has already built more than 2000 schools that offer education to nearly 5 lakh children.

Posted by orientpublication at Tuesday, January 26, 2016
Email ThisBlogThis!Share to TwitterShare to FacebookShare to Pinterest