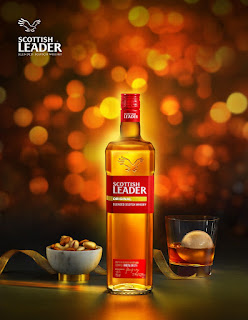 The blended scotch whisky brand has been a recipient of 53 awards since 2016
Led by one of the world's youngest Master Blender, Julieann Fernandes
11th OCTOBER 2021, NATIONAL: Distell Group and Aspri Spirits Pvt Ltd have been working together since 2008 and have successfully introduced various brands like Amarula Fruit Cream Liqueur, Nederburg and Two Oceans range of wines in India.
Distell International and Aspri Spirits Pvt Ltd join hands to introduce Scottish Leader in India. Following the brand’s success, the companies have decided to strengthen their partnership and further tap into India’s fast growing scotch whisky segment.
India remains an oasis for expansion amongst slowing global outlook where it is projected to be the fastest growing major economy. Income levels are expected to triple by 2025 with an urban market accounting for 2/3rd of consumption growth over the coming decades. Adding to this, the scotch segment has shown robust growth, making a great potential for the “Scottish Leader” brand in Indian market.
Guirec Danno, Managing Director, Distell Asia Pacific Distell Group said, “India is a large and fast-growing Scotch whisky market. Following the positive response from consumers since we launched Scottish Leader in India in 2017, we have decided to take our partnership with our long-term friends at ASPRI to the next level now. The whole team at Scottish Leader is thrilled to be able to bring, with ASPRI, our elegantly crafted spirit to Indian consumers. We are very confident they will love and enjoy our whisky as much as we do”.
Julieann Fernandes, Master Blender, Distell Group said, “Designed for a new generation of whisky drinkers, the award winning Scottish Leader Original is the perfect remix of sweet & smooth. Unconstrained by tradition, this expression is made, not just by a single master blender, but by a 15-strong blending team. Because, at Scottish Leader, we believe in having an open mind, collaborating and looking at whisky with a fresh perspective. Scottish Leader Original is fresh and vibrant with honey sweetness, making it the perfect choice to elevate any occasion.”
On the launch of Scottish Leader in India, Arun Kumar, Co-Founder Aspri Spirits Pvt. Ltd, said "We have a long standing partnership with Distell International and we will further strengthen our business relationship with the introduction of Scottish Leader in its new avatar. The Scotch segment has shown robust growth during the last decade and we do see great potential for the "Scottish Leader" brand in Indian market. We are positive that Indian customers will appreciate it for its superior quality and brilliant packaging.
Scottish Leader is an unapologetically modern brand with a clear vision to future growth. Scottish Leader has benefited from decades of forward-thinking Whisky blending teams who endeavor to produce liquids which appeal to the tastes of the day. With a combined blending experience of more than 400 years, they are dedicated to creating unique, quality whiskies with a singularly rich and smooth flavour. At Scottish Leader we believe in having an open mind, in collaborating with like-minded people, and ultimately looking at whisky and life from a new perspective.
Posted by orientpublication at Thursday, October 14, 2021