Fans in India can follow Abhishek Bachchan’s All-Star experience on NBA India’s official social media channels, including Twitter (@NBAIndia), Facebook (NBA India),Instagram (nbaindia) and the Line App (NBA India Official Channel).  Bachchan will also take over the @NBAIndia Twitter handle on Friday, 13th February at 9pm IST and answer questions from fans, who will have the opportunity to ask him about his favorite NBA players, teams and what he’s most looking forward to at NBA All-Star 2015.

“I’m excited and honored to be attending my first-ever NBA All-Star as a goodwill ambassador to the league,” said Abhishek. “I know my trip will show fans in India the excitement, energy and athletic ability of the NBA game and its players.  Basketball is my first love, and I look forward to supporting basketball’s continued growth in India.” 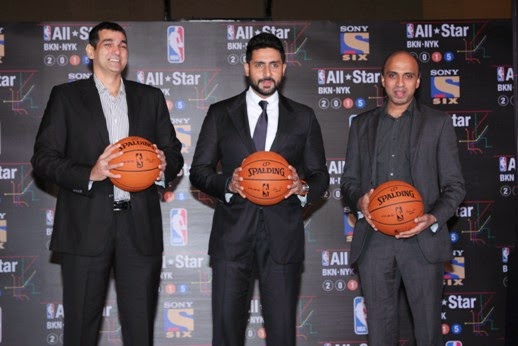 About NBA All-Star 2015:
NBA All-Star 2015 in New York City will bring together some of the most talented and passionate players in the league’s history for a global celebration of the game.  The 64th NBA All-Star Game, which will take place Sunday, Feb. 15 at Madison Square Garden, will reach fans in 215 countries and territories in 47 languages.  TNT will televise the All-Star Game for the 13th consecutive year, marking Turner Sports' 30th year of All-Star coverage, as well as the BBVA Compass Rising Stars Challenge on Friday, Feb. 13 and State Farm All-Star Saturday Night on Saturday, Feb. 14, which will both take place at Barclays Center in Brooklyn.  Other events at Barclays Center include the NBA Development League All-Star Game presented by Kumho Tire and the NBA Development League Dream Factory presented by Boost Mobile on Sunday, Feb. 15, airing on NBA TV.  Madison Square Garden will host the ESPN-televised Sprint NBA All-Star Celebrity Game, beginning Saturday, Feb. 14 at 5:30 a.m. IST.
Posted by orientpublication at Sunday, February 08, 2015