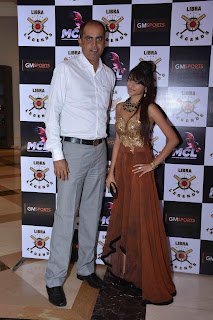 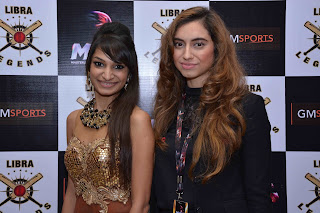 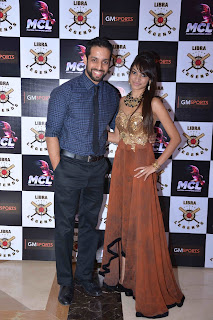 
Pooja Jhunjhunwala, Lalit Kiri and Hanwant Khatri of Popcorn Sports & Entertainment Pvt. Ltd. the biggest patron of sports & entertainment in the country became the proud owners of “LIBRA LEGENDS”- The First Franchise unveiled under Masters Champions League (MCL). Touted as one of the most successful youngest entrepreneur, Pooja feels privileged to be the owner of the 1st franchise under MCL “My company’s ultimate aim is to never let the sports and entertainment fever die. We wish to give quality entertainment to the masses. Owing a team under MCL is an honor. Our reason to be associated with MCL is their unique concept which attracted us to be a part of the MCL family”


Sam Khan- Director of MCL & Zarah Shah- CEO of MCL spoke a few words about the first team “LIBRA LEGENDS” under MCL and exhibited their fondness towards the sport.


Talking about the logo, the logo of “LIBRA LEGENDS” symbolizes victory. The logo resonates the irresistible nature of the game and how the love for the game lifts the spirit of each and every fan. The logo’s shape suggests forward movement, energy, speed and accuracy, just like the tools of cricket- Bat and a Bowl.


The pink color jersey with the logo engraved right in the center depicts how the team feeds off the energy of every individual talent and would look to play exciting cricket together in the MCL.


In keeping with the curiosity, Team Name, Jersey & Logo which was strictly kept under wrap was officially announced on 30th November, 2015 on Monday at J.W. Marriott, Juhu, Mumbai in the presence of cricket and Bollywood pioneers “We take immense pride to be the 1st team unveiled under MCL. I believe the team name, jersey and logo can speak volumes about the team ethics. Hence, I am that the name, jersey and logo have blown the audience away. We are looking forward to have the best cricketers in the team and eagerly waiting to set the pitch on fire” says Pooja Jhunjhunwala Joint Owner of Popcorn Sports & Entertainment Pvt. Ltd. along with Kiri Group,


Gone are the days when women were considered no match for all powerful men in this world. The male dominated world was always reluctant to even acknowledge the fact that women were as good as men on parameters of hard work, intelligence quotient (IQ) and leadership traits. Joint Owner of Popcorn Sports & Entertainment Pvt. Ltd. along with Kiri Group, at a very young age has glorified her name in the Industry “The new generation  women across the world have overcome all negative notions and have proved themselves beyond doubt in all spheres of life including the most intricate and cumbersome world of entrepreneurship. India too has its own pool of such bold and fearless women who have made a mark for themselves both within the country as well as overseas”


ABOUT MASTERS CHAMPIONS LEAGUE (MCL):
The Masters Champions League (MCL) is established with the objective of bringing together the real legends of modern-day cricket to participate in an action-packed Twenty20 tournament that is unlike anything seen before.
Many cricketing superstars from all of the world’s cricket playing nations will be participating in this tournament together and in the same teams for the first time ever. A golden chance for millions of cricket fans to see their favourite heroes in action.
THE MATCHES WILL BE HELD AT SHARJAH CRICKET ASSOCIATION STADIUM, SHARJAH, SHEIKH ZAYED CRICKET STADIUM, ABU DHABI, DUBAI INTERNATIONALCRICKET STADIUM DUBAI

Posted by orientpublication at Tuesday, December 01, 2015