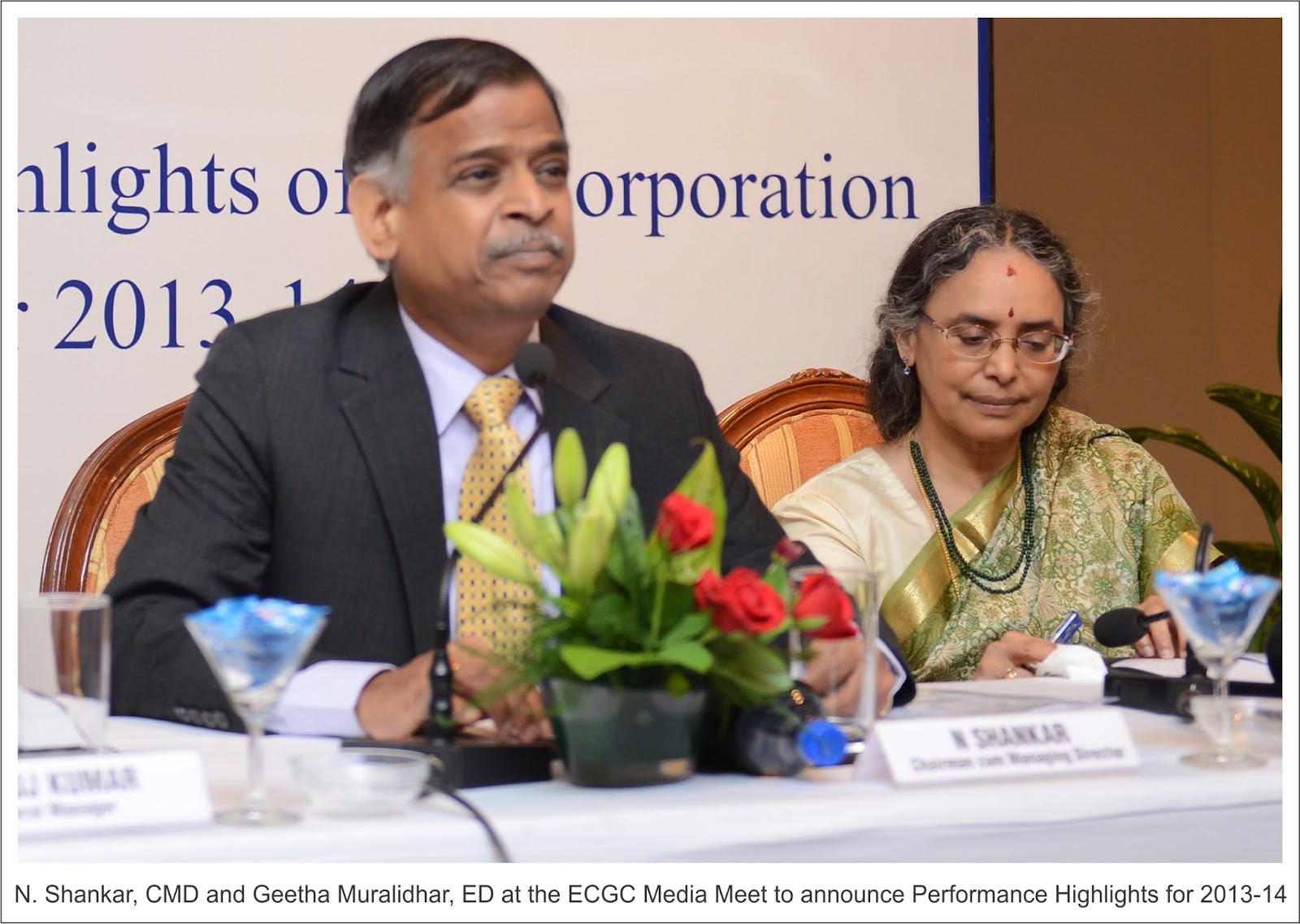 Export Credit Guarantee Corporation of India Ltd. (ECGC) registered an overall impressive performance during the FY 2013-14 with substantial growth in business, premium income, claim pay out as well as recoveries in its credit insurance business. ECGC was established in the year 1957 to support and strengthen Indian exports by providing export credit insurance to Indian exporters and banks offering credit towards exports. The organization is ‘iAAA’‘rated by ICRA which denotes highest claim paying ability.  The Authorised Capital of the Corporation was increased from Rs.1000 crores to Rs.5000 crores in July 2013.
Addressing a media meet to highlight business performance for the FY 2013-14, Shri N. Shankar, Chairman-cum-Managing Director of ECGC mentioned that the Corporation was able to meet expectations of its customers as well as its stakeholders during the FY 2013-14.Though there have been signs of  economic recovery in USA and Europe in 2013, political instability and strife in many countries like Libya, Syria, Egypt, Afghanistan, Sudan, Iraq, Turkey and Ukraine, heightened risks for exporters and financing banks.

Therefore, the role of ECGC, the national export credit insurer of India, continues to be very important and crucial as exporting without suitable credit insurance is fraught with huge risks. During FY 2013-14, ECGC paid out 381 claims worth Rs.109.29 crores to exporters under Policies issued to them and 175 claims worth Rs.639.55 crores to financing banks under Export Credit Insurance for Banks (ECIB) scheme. Average Annual Gross Claims Paid during the past three years is Rs.720 crores. Major sectors under which the claims arose in FY 2013-14 are Gems and Jewellery, readymade garments and textiles, engineering goods, chemicals, and agro products.
During FY 2013-14, ECGC earned a gross premium of Rs.1303.73 crores, registering a growth of 12.7% over the previous year. Average Annual Gross Premium Income for past three years is Rs.1155 crores and Average Annual Claim/Premium Ratio is 62.34%. The aggregate Risk Value covered by ECGC at Rs.2,79,254 crores during F.Y. 2013-14comprises those under Policies issued to exporters  (49%) and that pertaining to covers given to banks (51%).  As on 31.03.2014,11,109 short term Policies and 311 ECIB covers were in force. ECGC has issued 78 Whole Turnover covers to banks  under the ECIB  scheme and 29426 accounts of exporters with 3677 branches of banks are covered. The Corporation presently covers around 55% of total export credit outstanding of banks in India. As regards Policy business, the Corporation presently underwrites risks on 237 countries of the world and maintains records of more than 1,00,000 active buyers all over the world. The data on the importers is used for underwriting commercial risks on the overseas buyers. During the FY 2013-14, the Corporation added 17201 new buyers to its database.
ECGC also covers risks of project exporters and financing banks involved in medium and long term exports. Under this segment, the Corporation issued 19 fresh Policy covers to exporters and 96 covers to banks during FY2013-14 for projects that are being executed

in Oman, Nepal, Bahrain and Malaysia.  The Corporation also manages the National Export Insurance Account (NEIA) Trust on behalf of the Government.  Under NEIA, 16 project of value of Rs.10,132.12 crores were covered as on March 31, 2014 and the projects are being executed by Indian exporters in countries such as Sri Lanka, Thailand, Myanmar, Iraq, Algeria, Tanzania and Zambia.
Shri N Shankar also mentioned that the Recoveries during the FY rose by 31.66% to Rs.159 crores. After making adequate provisions for pending claims as on 31.03.2014 and probable claims in respect of impending risks, the Corporation earned a Net Profit of Rs.360.69 crores as compared to Rs.242.79 crores during the previous year.  A sum of Rs.196.65 crores has been transferred to General Reserve, raising net worth of the Corporation to Rs.2774 crores as on March 31, 2014.The Corporation proposes to pay a Dividend of Rs.88 crores to Government of India. The Solvency Ratio of ECGC stood at 11.02 as on 31.03.2014 as against the minimum solvency ratio of 1.5 prescribed by Insurance Regulatory and Development Authority.
The Corporation achieved most of its financial and non-financial targets as per the MOU signed with Ministry of Commerce & Industry and expects to get excellent grading for the year FY 2013-14.
On the international front, ECGC continues to play an important role in representing India as a national Export Credit Agency (ECA). ECGC is a member of International Association of Credit & Investment Insurers (Berne Union). During the year 2013-14, ECGC has signed a Memorandum of Understanding (MOU) with The African Trade Insurance Agency and two Co-operation Agreements with the Export-Import Bank of the Republic of China and the Exim Bank SR, Slovakia.

During the FY 2013-14, ECGC took various initiatives to promote exports and improve services to its customers viz. exporters & banks. The Corporation organized Export Risk Management Conclaves in association with D&B at important export centers in India during the FY as a part of its customer education and insurance awareness initiatives. Also, the Corporation organized export promotion seminars in association with Trade Bodies and Export Promotion Councils at various export centers. The Corporation provides a special window of cover to exporters and banks in respect of exports to Iran. The Corporation introduced three new products viz. Multi Buyer Exposure Policy for medium based exporters, Policy for small exporters and micro exporters during the FY. A comprehensive Buyer Score Card System has been implemented towards objective and expeditious credit limit approvals.
The Corporation introduced a new country risk rating system with new features.  The CMD also informed that the Corporation opened its first overseas office at London in September, 2013. The overseas office mainly facilities better assessment and management of risks and also recovery of claims paid in European markets. The Corporation on its own will be shortly launching a full ledged Factoring services for exporters.  The Corporation proposes to open -3- new domestic branches in 2014-15.  Overall, the Corporation expects to grow its business and also strive for better customer satisfaction during 2013-14.
Posted by orientpublication at Tuesday, May 20, 2014